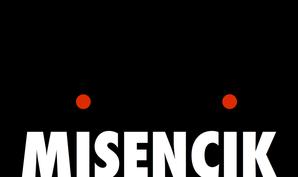 It was 1989 . . . Jay Misencik and Geralene Valentine were operating a commercial photography studio in Bridgeport, CT. They were working in approximately 5,000 sq. ft. of renovated loft space in a 100 year-old brick building that once housed The Rose Dress Factory.
Also in 1989, Jay and Geralene began "The Bridgeport Project", a cultural/heritage documentary style photography and storytelling project. They used black and white film to do environmental portraits of people with different occupations on Bridgeport’s Main Street. Among those photographed were a barber, a butcher, and a “paperboy” who would soon celebrate his 80th birthday. They produced a 1993 calendar with the photographs and also exhibited photos from the series at The Barnum Museum in Bridgeport. The Main Street photo series tells a story about the end of a generation, the end of an era in Bridgeport.
While photographing people on Main Street, Jay and Geralene began focusing on buildings, signs, and murals throughout Bridgeport. These constructed objects have their own comment about the city. In 1991, Jay and Geralene also began photographing the long shuttered Palace and Majestic theatres on Main Street in Bridgeport’s downtown.
Also in 1993, The Thomas Merton House of Hospitality (a local “soup kitchen”) asked Jay and Geralene to do a series of client portraits and produce a 1994 calendar to use as a fundraising tool. The calendar was so successful, they produced another series of portraits at The Merton House for a 1999 calendar.
In 2015, their Palace and Majestic theatres series of architectural photos was complimented with a series of portraits of people who had a connection to the 1922 vintage theatres. Jay and Geralene photographed former “candy girls,” usherettes, a man who play boxed his father on stage in 1931, women who had a first date at the theatres with the “boy” they would eventually marry, and the last manager of the theatres. They recorded the stories these people told about what theatres meant to a city’s downtown. In 2017, they published a book about the theatres.
In 2014, Jay and Geralene began doing straightforward, color, digital, “studio type” portraits of everyday people, from different neighborhoods throughout Bridgeport. They photograph at different locations (libraries, an auditorium, The Barnum Museum, a church, and the zoo) in the city. Later they record each person telling their own story. This series compliments the earlier “occupation portraits” and helps to show the evolving culture of the city.
Over its 30 plus years, The Bridgeport Project has become a “micro history” of the city. Jay and Geralene began it with the intention of simply bringing people together so they better understand, appreciate, and meet their neighbors. Project participants share their stories of hopes and beliefs . . . culture and heritage.  They define Bridgeport and tell why the city is so much more than just a PLACE.
As part of "The Bridgeport Project", The Bridgeport Portrait Project is ongoing.